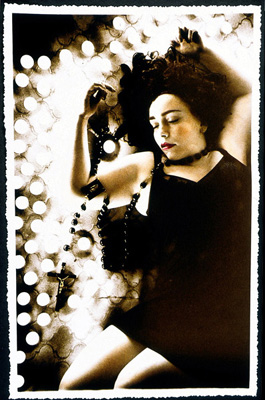 'RAISED BY WOLVES'
THE GIRLS
Curated by Stephen Mahoney

The curator of The Burlington Club, Stephen Mahoney, said "I first came across The Girls whilst talent spotting at Saint Martins in 1998 during their first incarnation when they wore matching pink outfits. I was excited to hear about their reformation last year, and The Burlington Club is delighted to host their show which we are confident will be a hit with our art-savvy members."

The Girls are British artists Andrea Blood and Zoe Sinclair, aged 31, whose award-winning collaboration began 11 years ago while both were students at Central Saint Martins School of Art. Their colourful surreal art consists of staged portrait photography, including self portraiture, which is a contemporary adventurous spin in the Gilbert & George and Cindy Sherman school of thought.

The Burlington Club is just off Regent Street at 12 New Burlington Street, W1. It is open to the public from Monday - Saturday from 6pm, and is strictly members only after 10.30pm. The nearest tube stations are Piccadilly Circus or Oxford Circus.

Special thanks to Tapestry for their continued support.